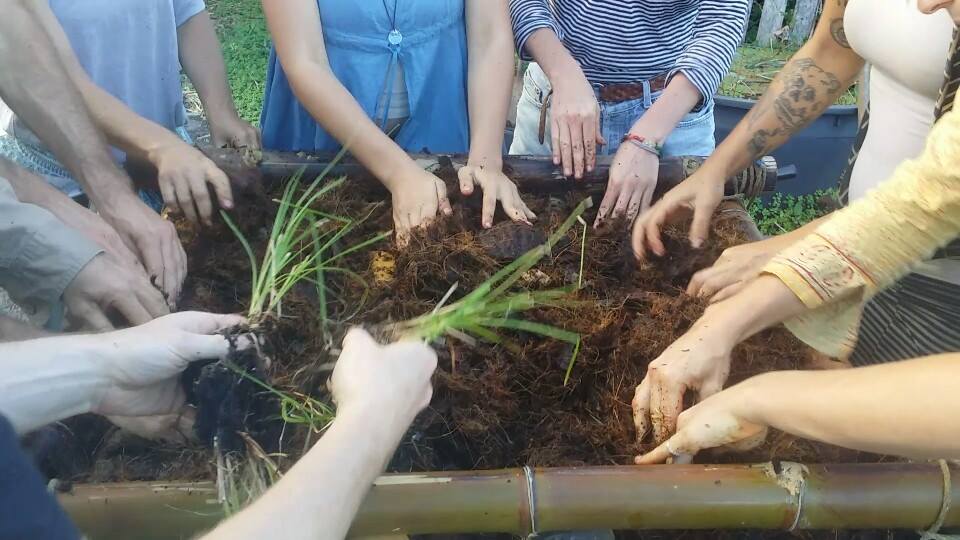 Recently we ran a Permaculture Design Certificate – Water Module workshop in partnership with Growing Roots Permaculture at the amazing Starseed Gardens where participants learnt how to build a natural floating island. The floating islands were planted with a variety of species that play different roles. Floating gardens are super productive and support nutrient dense plants such as water cress which is a superfood, water spinach and kang kong an asian green. We also planted vetiver grass and carex grass which provide a floating wetlands effect via biofiltration with their larger roots, taking up excess nutrients present in the water. The word Chinampas comes from the Nahuatt word for “square made of cane”, so if we take this as our guide, harvesting bamboo, cane or similar material is a way to get started.

Materials harvested onsite at Starseed Gardens included bamboo and camphor laurel which is a weedy tree and these two core materials provided floatation, lashed together with hemp rope. The camphor laurel had dried out to provide better buoyancy. Reeds and sugar cane were harvested and dried out on site, and coconut husk was sourced from locally sold coconut water. The coconut husks were laid out on the ground and a tractor slasher run over it to break up the husks into useable coconut fibre, perfect as a planting media. The reeds provide significant carbon source, and the sugar cane provides trace amounts of sugar which accelerates plant growth. Dan Schreiber has been experimenting with aquatic plants and substrates for many years at Starseed Gardens. When Dan and Tom met there were many discussions about what the best way to design the floating islands, floating gardens and floating wetlands would be. 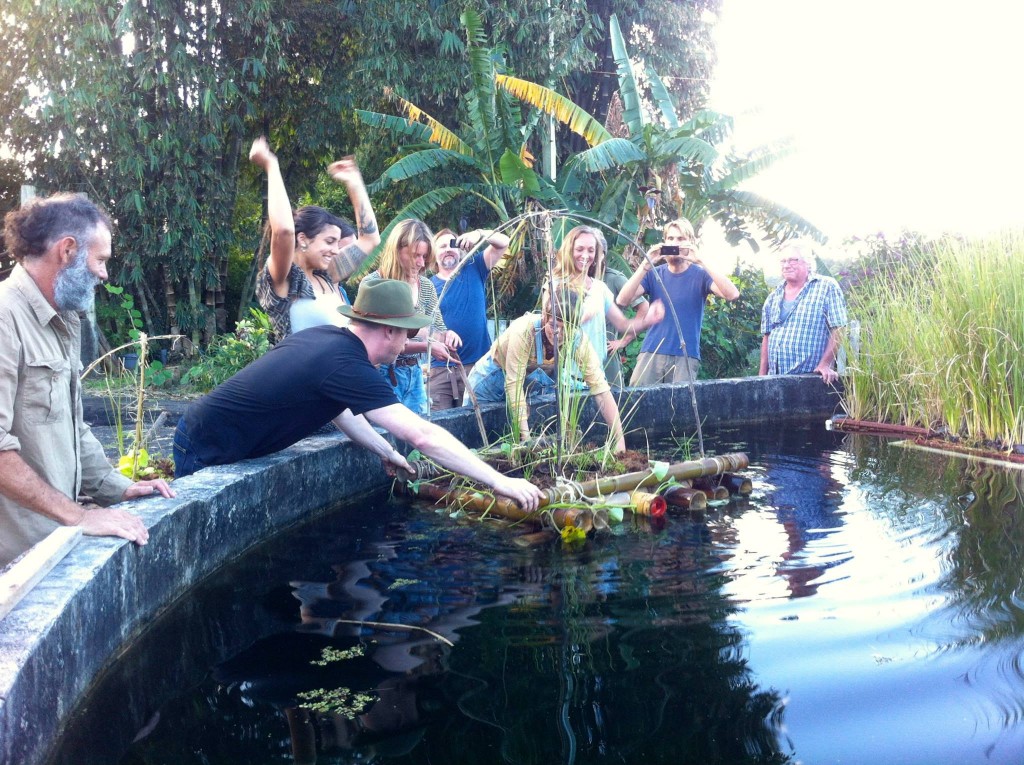 Through collaborative design process and foraging for suitable bio-materials, several designs presented themselves quite organically. All the bio-materials are representative of what is typically available in many sub-tropical and tropical climages. Together the bio-materials provided the appropriate plant growing medium and biofilm host, to support the transport of nutrients from the water into the plant roots, as well as natural floatation. These materials were assembled in a design led by Dan Schreiber (pictured above far left) and Tom Duncan (pictured above 2nd from left) collaboratively to build a natural floating island capable of growing food, and biofiltering excess nutrients out of the water. 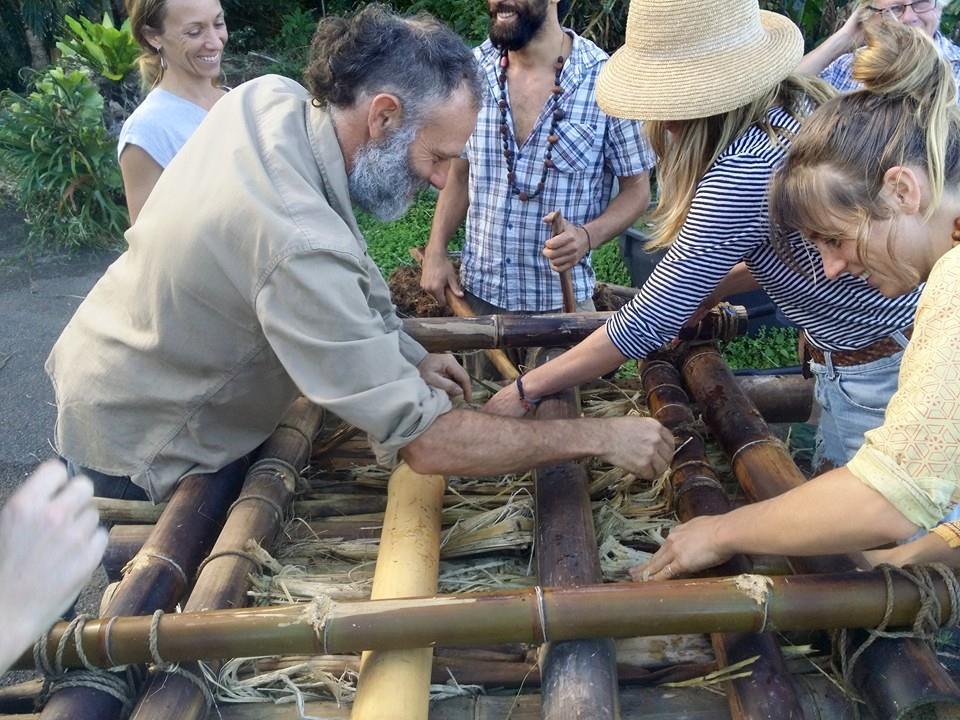 As part of a cumulative Chinampa system evolution, over time the floating islands will sink, potentially after 2 years, and over that time will have provided an abundant harvest of food crops (up to 2 – 10x the productivity of conventional land based growing systems), whilst also biofiltering the water and providing sub-surface aquatic habitat. Permaculture design seeks to build elements that are multi-functional and serve multiple needs simultaneously. Floating gardens, wetlands and islands that can transition to Chinampa systems in ponds, dams, lakes and canals is a good example of the type of innovation that is needed in the face of climate change and building resilient communities whom are disadvantaged and exposed to water level rises. Many disadvantaged communities around the world inhabit low lying areas and drainage ares or steep hilly terrain because many planners know of the risks of living in these types of locations. For communities in low lying and flood exposed areas, floating islands combined with adapable human habitat systems may offer a way for exposed communities to bringing food production, waste management and living systems together into a symbiotic system. 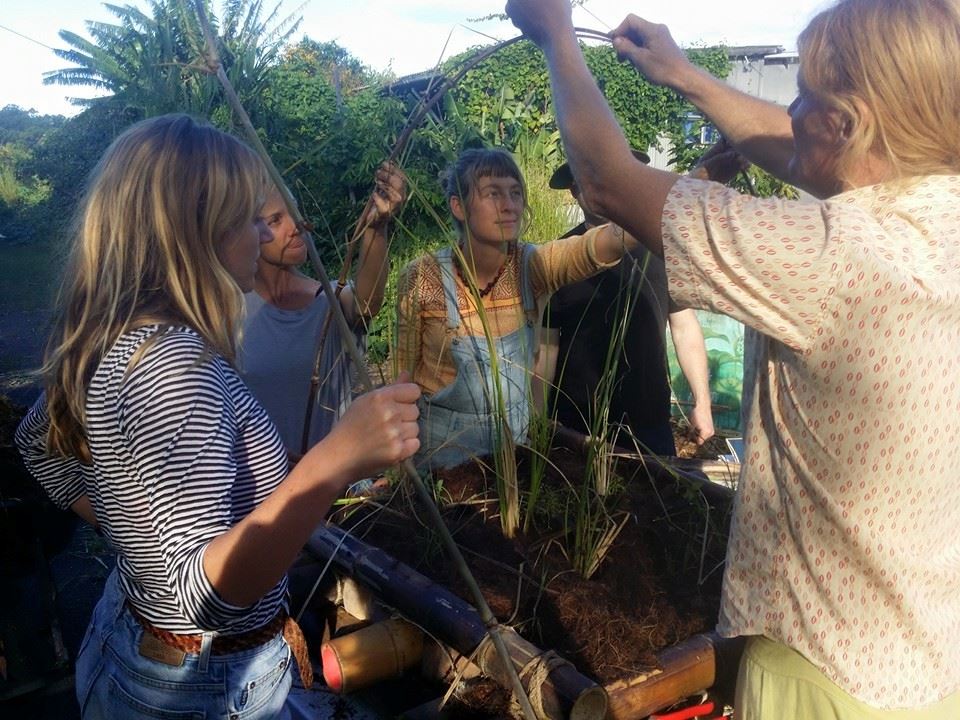 Bringing back an almost lost art – Chinampas from the Americas 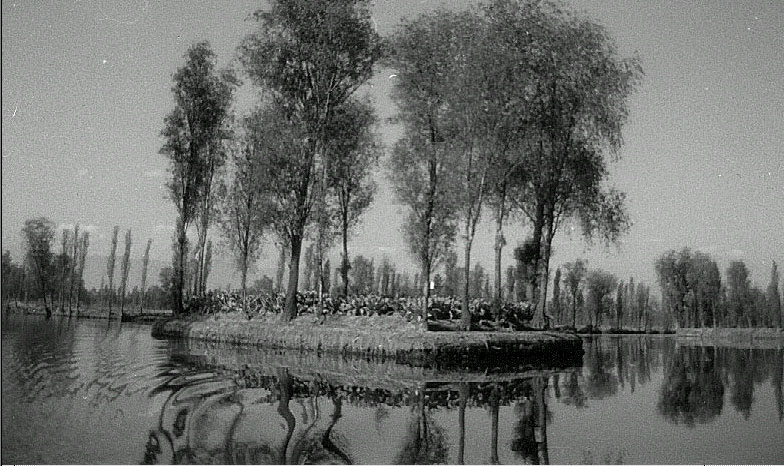 Central and South American cultures perfected the chinampa system which started off as an aquatic growing system, often with floating islands, and over time more complex systems evolved including earthworks in marshland and adjoining lakes to accelerate chinampa ‘fingers’ or ‘aquatic grow alleys’. The origination of the systems is thought to be from communities that have been inhabiting lakes to take refuge from marauding neighbour cultures. Lake Titicaca Uros people had large communities living on floating islands build from reeds in which they would grow corn, beans and many food crops on the islands with an abundance of fish and game to provide a rich mixed diet. 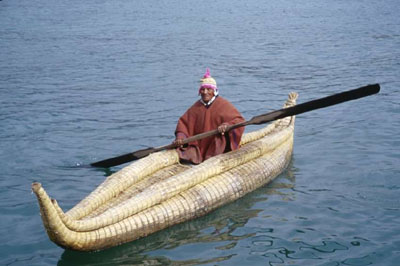 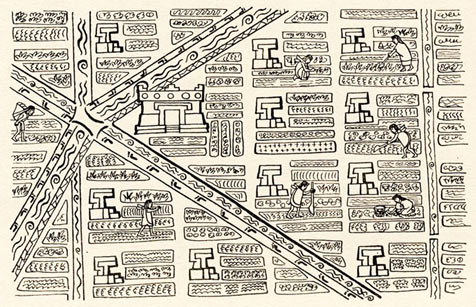 As middle America evolved empire building cultures such as the Aztec, the systemisation of chinampa building became a science and engineering effort to maintain the empire to feed itself. The Aztec empire could put it’s large workforce into action to build the chinampas. Often specific willow like trees were planted on these floating islands to help anchor the floating islands. 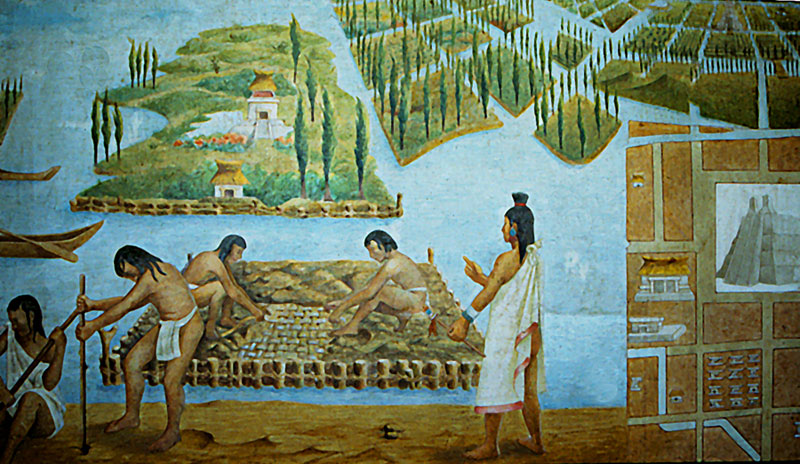 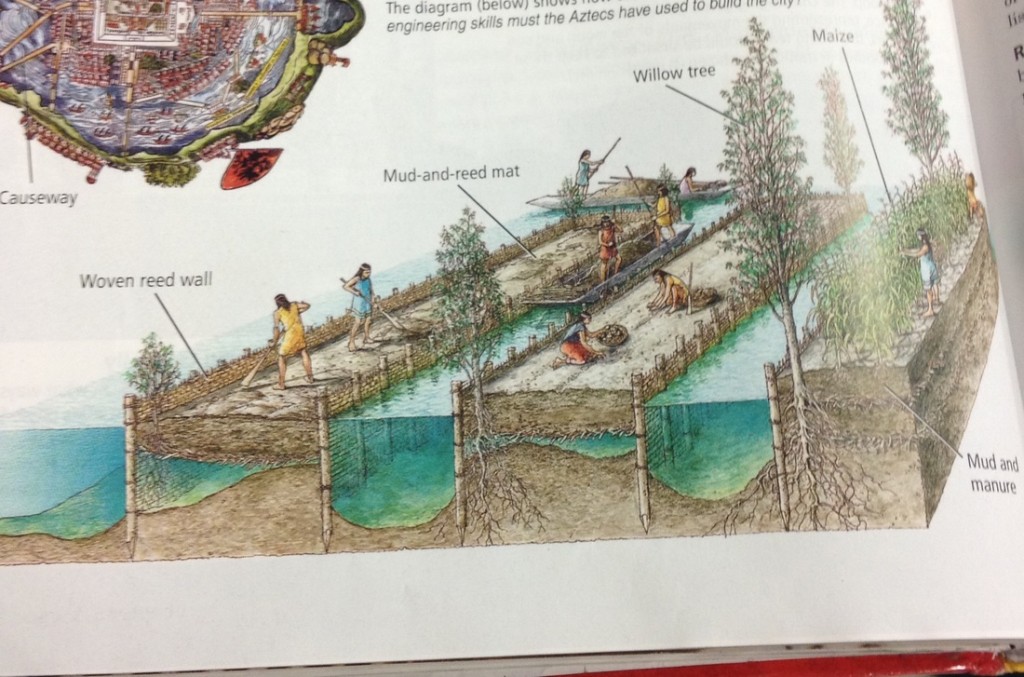 New floating islands would be installed around and on top of them or simply added on top of the sagging island (as seen in middle section of above image) and this cycle would continue until enough height was built up to make it a free standing island, with a large aquatic eco-tone edge that is capable of producing large quantities of food.  Trees at the edge of the island-cum-chinampa would anchor the system in place and be able to resist floods and storms. 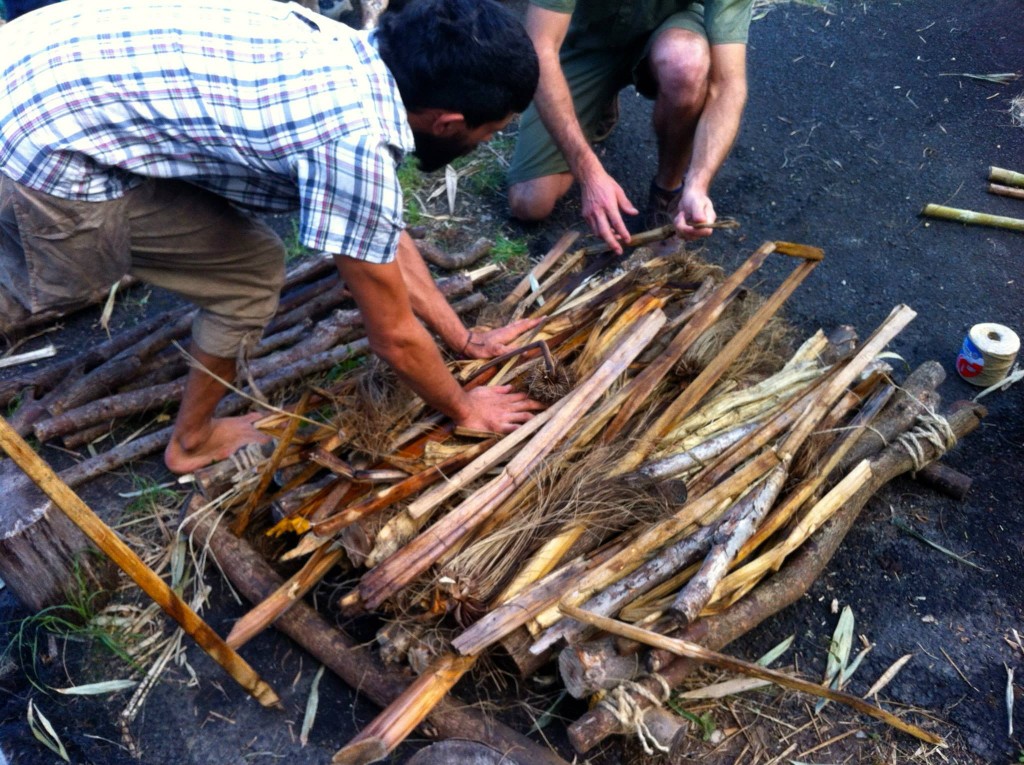 Photos taken during the Permaculture Water Workshop demonstrate how we are attempting to recreate the Chinampas with completely natural materials. Building floating islands is labour intensive work and when done collaboratively, it creates highly effective food production systems that self-water and self-fertilize from the water below. Chinampas are symbiotic design elements between people, water, plants, fish and animals. 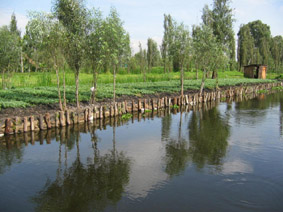 The labour intensive nature of floating islands and evolution to chinampa systems to create long term food production systems require a diversity of materials and skill-sets that take time to acquire and be trained up in. But the long term benefits are realised through self-watering plants and self-fertilising plants, taking out a significant labour and resource component once established. 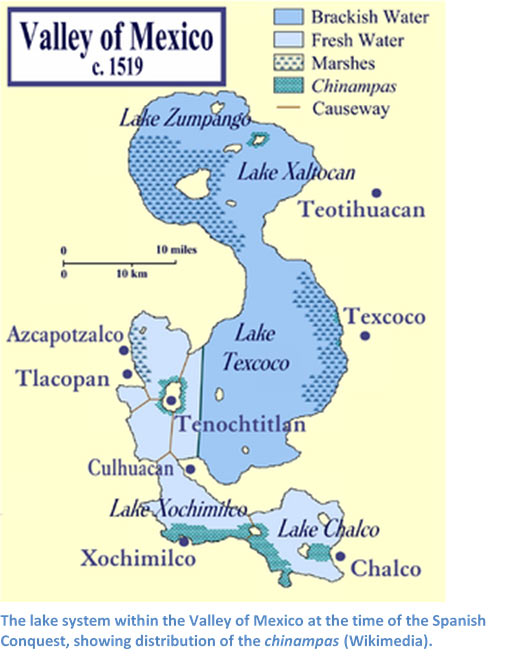 Complementary benefits include fish that will spawn in the root systems of chinampa islands because the floating root zone provides a protective habitat from predator birds and other fish. Frogs also spawn in plant roots and the complex ecosystem that chinampas and floating islands support during their various life cycles are of tremendous importance to ecological stability and long term sustainability of aquatic ecosystems. This adds to the overall biomass and food production of the system, providing greater yields than standalone elements.

Large-scale floating wetlands and floating islands can be seen at our Aqua Biofilter Floating Wetlands website.

raised in less than a minute 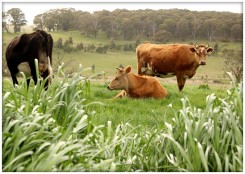 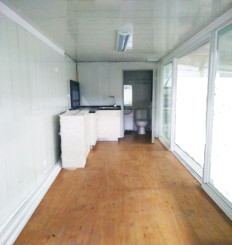 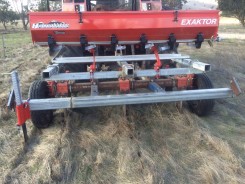 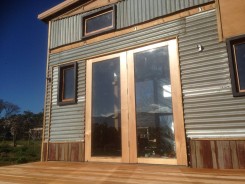